7/6/12 – We started the day by going to Mitchell’s World Famous Corn Palace. The outside walls were covered in corn and the design changes every year. It is classic American kitsch but seemed pretty shallow. We quickly drove by the very plain library in Mitchell to the former Carnegie Library, now a Resource Center. I had been looking forward to seeing the 1940s WPA mural on the ceiling of the dome designed and painted by Sioux artist Oscar Howe. Unfortunately it was closed. We then drove quickly across the state to the town of Wall, SD. Its Drug Store is also famous but we were both pretty tired of tourist traps. In contrast to Wall’s phoniness the library was a real gem. It was old and made out of stone and had all the substance that Wall Drug lacked. Soon after we left Wall we entered Badlands National Monument. Here the contrast between kitsch and substance couldn’t be greater. We soaked up the subtle color and beauty. As always the National Park System did a great job of managing this national treasure. As we entered the Pine Ridge Indian Reservation we entered another world. This is one of the poorest places in the country. The average income per capita is $1,500/year. 96% of the population lives below the poverty line. The libraries here are few and far between. In Allen, SD, statistically the poorest town in the United States, there was a library in the Oglala Lakota College. However, it was only for the students, not the public. The town looked poor with crumbling houses and trashed yards. Even though the Tribal Center was open it was dark and felt empty. We drove into the really small Lakota town of Batesland, SD. We heard a weird thumping sound from the car. We pulled into a dirt church parking lot where I used a piece of thin wire tie from a food bag to connect the flapping parts until we could get it fixed later. We drove 20 minutes down a dirt road to a B&B that Walker had found on the Internet. It was owned by a white family and is a working farm. They even had the original deed of ownership signed by President Coolidge in the 1920s framed on the wall. Several people told us that we were very lucky with the timing of our arrival. The Lakota Sioux were having their annual Powwow starting this night back in Batesland. We drove our well-worn Camry down the sandy, washboard road into town. What made this Powwow special was that this was being done by the Indians and for the Indians, not for the tourists. Everyone was friendly in this non-commercial event. We felt totally accepted as we chatted with a Lakota couple that had originally met at the Stanford University Powwow. The man, Kelly Looking Horse became the main MC as the dances began. The beauty of the swirling costumes in the red sunset astonished Walker and me. We sampled Indian tacos that were served in an open Doritos bag with meat, onions and cheese over crumpled spicy Doritos. Delicious! The only other non-Native people at the event were a group of Presbyterians from northern Virginia. They were there to do much needed work on the Reservation. These people gave Christianity a good name. Later, with the haunting sounds of the Lakota drumming and singing in our heads we fell into a deep sleep back at the B&B. 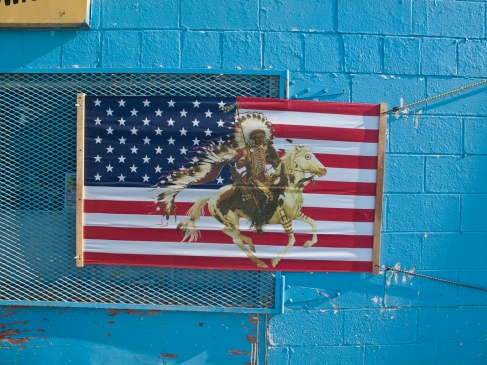 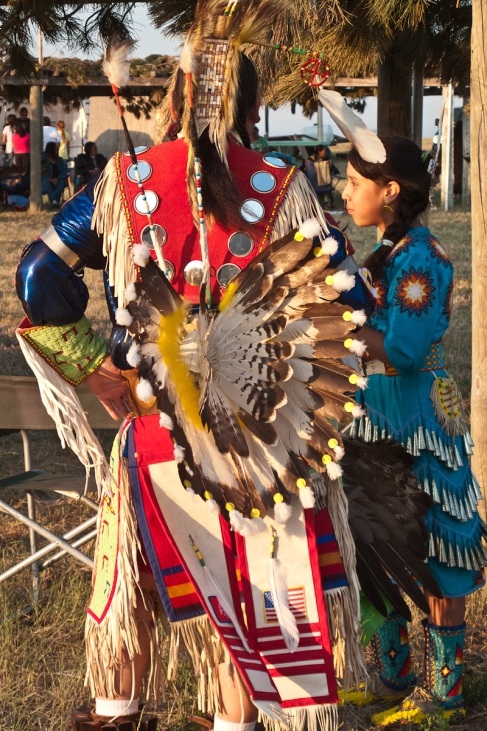 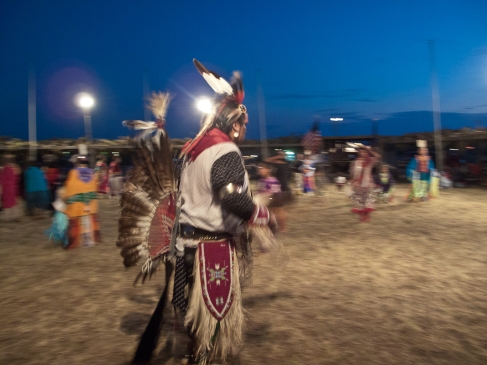 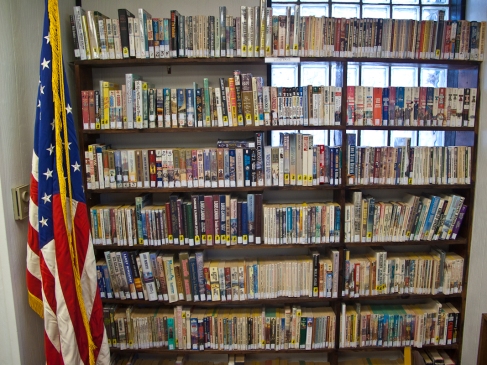 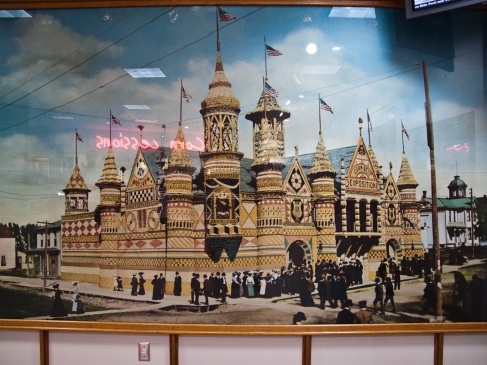 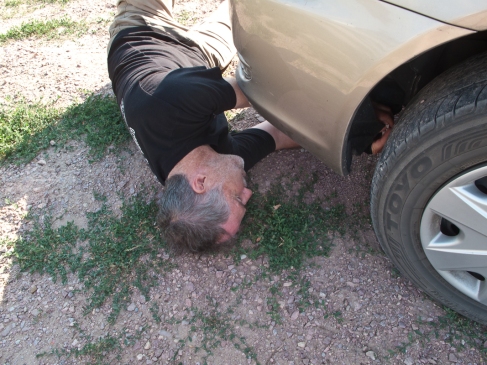 7/7/12 – Walker had never stayed in a bed and breakfast before. We participated in the slightly awkward ritual of having breakfast with our hosts and guests. They all turned out to be great people and even all had a liberal bent. We drove back to Batesland to get the car fixed. The Indian man that worked on it had just come from a memorial service for his daughter who had been killed by a drunk driver. The sky was gray and it was raining as we drove into Wounded Knee, SD, site of the last big massacre of Indians in 1890. The US Army slaughtered over 250 mostly women, children and old men as they were surrendering. This national tragedy felt very current here today. In the 1970s the American Indian Movement occupied Wounded Knee for many days precipitating another tragedy as the government tried to evict them through force of arms. It was drizzling as we climbed the hill to the mass grave for the 1890 victims. Walker and I felt an overwhelming feeling of sadness and shame. We stopped at the unlit and very poor Visitors Center that was basically a monument to the American Indian Movement. We bought a bundle of sage as a gesture to healing. We drove on in silence listening to a Lakota Christian radio station broadcasting hymns sung by local people. The station also broadcast testimonials by locals on why they were Christians. I will never forget the guy with the shaky voice recalling his alcoholic parents who abandoned him, the older man who raped him and his anger turning him to join gangs and worship the devil. He broke into a local house and stole much of what they owned. When the family turned around and prayed for his soul he found God. And then he married the daughter of the family he had robbed. We arrived in Pine Ridge in a dark mood. This town was very poor and filled with problems, especially alcoholism. Life expectancy here is lower than in Afghanistan. We went into the local market and I discovered an amazing photo book on the local area. Walker bought an Oglala Lakota Nation hoodie. We then drove two miles south to the Nebraska border town of Whiteclay. Located just outside the dry Reservation it is a magnet to Indians looking for alcohol. 13,000 bottles of beer and malt liquor are sold here everyday in a town of 11 people. The New York Times did a recent story about this national tragedy (see attached article) and the businesses fueling this addiction. The story states “In February, the Oglala Sioux filed a federal lawsuit against the stores and Anheuser-Busch and several other brewing companies, accusing them of encouraging the illegal purchase, possession, transport and consumption of alcohol on the reservation. Fetal alcohol syndrome, fatal drunken driving accidents and beer fueled murders have cast a pall over Pine Ridge for decades.” It is estimated that 1/3 of the women on the reservation have been raped. I had never been in a town where everyone was drunk all the time. Zombie-like men staggered down the wet sidewalk and collapsed. The gloominess of the day added to the desolation of Whiteclay. Walker went into a food store to get a sandwich while I fended off drunken men rapping on my car window begging for money for booze. I texted Walker that he should get back to the car “quick” but in my haste sent it to my wife Ellen back in San Francisco. She was quite concerned. We couldn’t get out of Whiteclay soon enough and spent the rest of the day trying to recover from this horrible experience. Neither of us had seen anything quite this bad, except perhaps Walker’s trip to Dhaka, Bangladesh. We eventually made it to the Black Hills of South Dakota. Here was the scene of an earlier tragedy and also the creation of an American icon. After signing a treaty with the Indians in the 19th century guaranteeing them ownership of the Black Hills forever gold was discovered. General Custer (yes, that Custer!) was brought in to remove the Indians and make the area “safe for the prospectors”.  No Indians live in the area today. After photographing the old Carnegie library in Hot Springs, SD we wound our way through the length of the Black Hills. We photographed buffalo and antelope by the side of the road in the beautiful Wind Cave National Park and the Custer (yes, that Custer!) State Park. History is indeed written by the victors. We were desperately in need of the solace of open spaces after what we had seen in Whiteclay. The Black Hills were beautiful and we could understand why they were sacred to the Indians. Mt. Rushmore is impressive, even from a distance. The Iron Mt. highway is absolutely insane with its one-lane tunnels, 360-degree hairpin loops and tiny wooden bridges. It was actually fun to drive this crazy but beautiful highway. Mt. Rushmore was even more impressive up close. I was last here with Ellen on our honeymoon in 1983. It was much more chaotic back then and again I applaud the NPS for making this place a great and accessible experience. We ended our drive in Deadwood, SD. This was the colorful 19th century mining town that today is a western theme park living off its past. I called it Disneyland in Deadwood. Walker and I were both overwhelmed by the range of experiences that we had today. The destruction of the Indian tribes continues in Whiteclay and Pine Ridge. Good people are trying to change that but is an ongoing struggle. The Black Hills saved our sanity. The redemptive power of nature is real. But at night as we were trying to sleep both of us were silently crying inside with grief for the insane, third-world conditions that we saw today in this part of Native America. 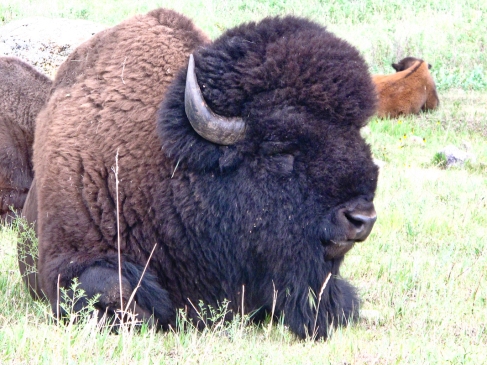 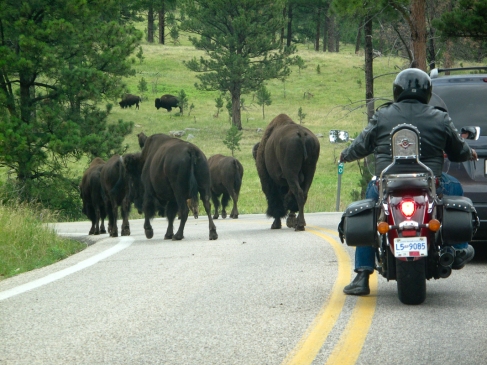 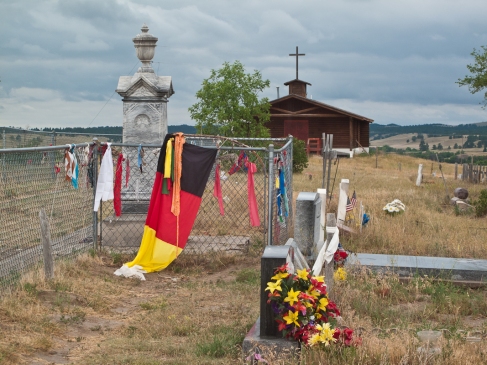 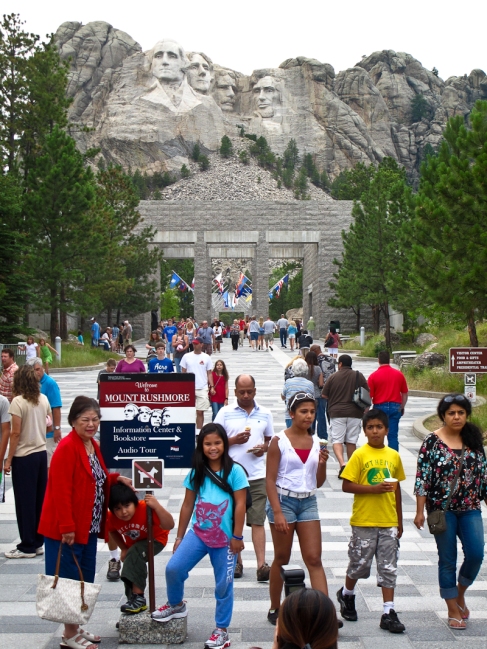 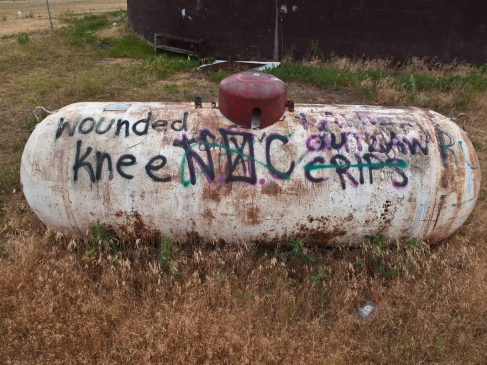 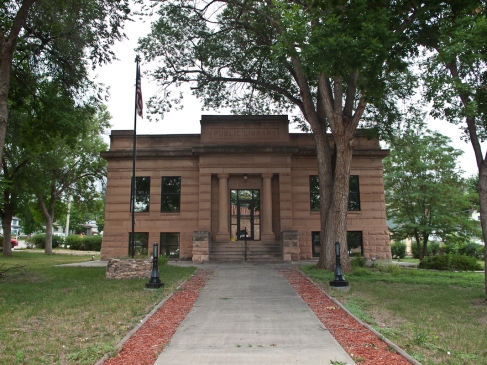