6/19/16 – Somehow the beautiful little German town of DInkelsbühl escaped over 400 years of destruction from the Thirty Years War to WW II. Today it is one of those impossibly cute little European towns that is a tourist trap but still retains its integrity as a connection to another time. It’s library was simply magnificent. Because of the tight little streets I wasn’t able get back far enough to gain a perspective on the whole building. Fortunately, my colleague at Stanford, Craig Weiss, had lent me his old 28mm PC (perspective control) Nikon lens that allows me to get correct perspective and still get the whole building. It really came in handy here. Our next stop was the far western German town of Trier. Everything about this old Roman town was fascinating including the old funky Bulgarian owned hotel we stayed in. It is one of the oldest cities in Germany. Trier had seen some dark days including the first mass genocide of Jews around the year 1000 by the members of the first crusade on their way to Jerusalem to slaughter the Muslims and Jews there. The ancient cathedral contains plenty of ghosts from that horrible past as well as being the site of WW II Nazi speeches celebrating this “glorious” past. Trier today seems young and vital with an evening rock concert next to the Roman wall. It is one of our favorite places so far in Germany. However, the past feels close here in Europe.

6/20/16 – Another long day of driving from Trier to Luxembourg City to Verdun and Reims in France. The National Library of Luxembourg was odd. In one of the richest countries on earth the National Library was surprisingly modest. It’s all about priorities. As the very nice Staff member told us it is easier to fund sports arenas than libraries. The setting for the City is astonishing beautiful. I was interested in Verdun, France because of the memory of the First World War. The small town was completely destroyed during the war and it had the feeling of being suspended in time. The library was housed in a old government building and overflowed with an incredible collection. It’s main collection was medieval material but the librarian had recently been interviewed by CNN because of its WW I archive for the 100th anniversary of the famous battle of Verdun. It was another place that felt filled with ghosts of the past. We finally arrived in the old French city of Reims. It too had been destroyed during the First World War. The American philanthropist Andrew Carnegie had build three “front line” libraries after the war in towns that had been on Western Front. Reims was one of them and had an incredible library built in the 1920s. After dinner, Ellen and I walked with my cameras through the misty evening to the library. We could see it at the end of the fog shrouded street and after we tuned the the corner noticed it was across the street from the famous gothic cathedral of Reims. As I set up my camera to photograph the Art Deco library juxtaposed next to the Gothic cathedral the lights came on in both buildings. In the gloom of the evening I made what I think was one of the best photos of the trip so far. 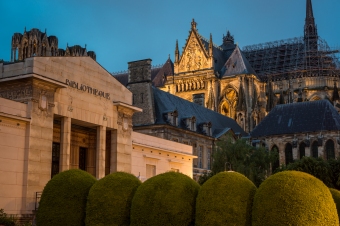 6/21/16 – Most of the morning was spent photographing the interior of the Carnegie Library of Reims. The Reading Room was crowded and beautiful with great stained glass windows including one in the ceiling. I also focused on small details such as the tile panels in the lobby and a great Deco bannister. The rest of the afternoon was spent on a long drive in the rain driving to Belgium and finally Brussels. We first encountered the insane traffic of Brussels as we entered the downtown. This was the worst we had seen so far in Europe. As we neared our apartment we saw soldiers with machine guns quickly evacuating people from a building and closing streets. It showed the incredible security that Brussels is currently under from terrorist attacks. It wasn’t far from our minds throughout the time we were in Brussels. We arrived at our apartment in a downpour. We met up with Walker’s good friend Anita Willcox who helped us throughout our stay here. She was a class mate of Walker’s at the New School in New York and is now living in Brussels and is a graduate student here. She introduced us to a great dinner place and then we took a long walk through the street of Brussels that were finally free of the constant rain.

6/22/16 – Recovering a little from our constant travel over the last week we begin our photography in the early afternoon. We visit a special library called Bibliothêque Espace El Boroudi housed in a community center called Espace Magh. It was founded by a North African man named Boroudi who was an immigrant, labor activist and defender of immigrant’s rights in Brussels. The library was small and filled with a variety of Arab language books. It showed the commitment of one activist to making his community better. We then went to the small branch library called Bibliothêque Hergé. This was named after the famous Belgium author Hergé who lived in the neighborhood. Belgium is famous as a home for graphic books and art. Hergé’s series of books on Tintin introduced generations of children and adults to travel and the world. It was important for us to see a small, well run neighborhood library after seeing so many grand or unusual libraries. The Belgium soccer team was playing Sweden in the European Cup this night so as we ate dinner in an outside cafe in a little plaza we could hear the wild screams of the fans coming out the nearby bars. We saw Belgium win in the final minutes as we stood in an African run bar.

6/23/16 – The ancient Library of the Catholic University of Leuven housed an outstanding, irreplaceable archive of medieval manuscripts until it was completely destroyed by the German Army during WW I. As the idea of the Global Library Project began to form the story of this library caught my attention. The term “bibliocide” – the intentional destruction of books or libraries to punish or erase the memory of a people – is seen throughout the world and throughout history. This library was the first that I had seen that showed that concept. After a great international outcry over the destruction of the Leuven Library a great outpouring of support to rebuild the library occurred in the 1920s. Unbelievably, the Library was destroyed again in the fighting of WW II. It exists today as a monument to peace and a symbol of the horrors of war. The second library we photographed was the Bibliothêque Molenbeek. This neighborhood of Brussels became famous because of its large number of Muslim families living here and because some of the recent Islamic terrorists in Paris and Brussels came from here. In the US the name Molenbeek is synonymous with terrorism. The small Molenbeek public library had three wonderful librarians but was almost empty because of Ramadan. The photos I made outside showed the humble exterior of the library overshadowed by a massive apartment complex towering above. It showed the complexity of Europe today. 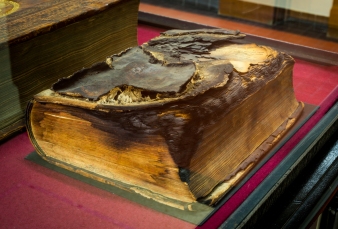 6/24/16 – After sleeping an exhausted sleep Ellen and I spent the entire day in our AirB&B room doing work and catching up on email. Walker and Anita did the laundry and got see the sites of Brussels.

6/25/16 – The Provinciale Bibliotheek in the tourist trap called Brugge was quite beautiful. While we were there we could feel the rising tide of tour busses, weddings and deep fat food filling the air. I would love to spend more time in this lovely old town but without the hoards of tourists. We finally arrive in the French seaside town of Calais. After checking in to our Ibis Hotel we head over to the most famous refugee camp in Europe called The Jungle. We meet a woman named Mary Jones who started the Jungle Books Library. Located on a former smelly landfill this remarkable place is filled with desperate men (the women and children are housed in a different camp) who are trying to illegally enter into England by way of the English Channel Tunnel which starts in Calais. For many this camp is the end of the line after an arduous journey escaping from war, starvation and poverty. We meet refugees here from many parts of the Muslim world as well as many Africans. The volunteer tutors were mostly younger women and mostly British. They gave me back some respect for the Brits after England’s recent stupid move of Bexiting the EU. The Jungle is a sad place and the Jungle Library is one of the very few bright lights in a dark place. On entering the Library I encountered a room made out of plastic sheeting overflowing with books and refugees. Intense tutoring sessions were being conducted on my right by a 24 year old British woman to a group of Iranian men. On my left an Indian looking woman was doing the same with a group of African men. Everyone seemed to desperately want to learn English although some of the Iranians seemed as interested in their beautiful tutor as they were in their language lesson. Walker and Ellen conducted an interview of Mary Jones while I photographed for many hours in this harsh place. Because most refugees did not want to be photographed I focused instead on symbols such as maps of refugee routes, hand drawn signs saying things like “I love Afghanistan” and language lessons on a chock board. I walk around the camp and photograph graffiti covered plastic shacks, an Ethiopian Coptic church and the sad little plastic covered places that the refugees call home. As I was finishing up a angry young Middle Eastern man insisted that I erase the photo he thought I had taken of him. I explained that I had not taken a photo of him and that I was using a film camera so there was nothing to erase. He still seemed angry and I could see the explosive frustration some of these refugees experience. As we were walking out we strolled down the Main Street of the camp. As we stood in front of the Jungle Book Library Kid’s Cafe (only for 18 year olds or younger) a fight broke out right in front of us. The Cafe immediately emptied on to the street with some kids carry pool sticks ready to fight. At exactly the same rime some dude came very close to pick pocketing my wallet which I had stupidly left in my back pocket. Fortunately I caught him before he could complete the heist. At that point we bailed from the Jungle. To decompress Walker nicely arranged a short drive to a spot on a cliff overlooking the French countryside and the English Channel where we ate bread and cheese and thought about our amazing day. 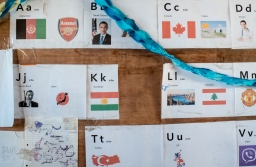