6/30/16 – Zentralbibliothek Duisburg is in a working class German city of around 500,000 in a metropolitan area of 18 million people. It is in the heart of the industrial Ruhr Valley area. The area was heavily bombed during WW II and the city consists of mostly post war buildings without the Old-World charm of many other German cities. It has a large immigrant community and here we are interested in how the public library is helping with that effort. We don’t have a personal contact in this library so we all turn on the charm to the receptionist who we later realize doesn’t speak English. Finally, the Librarian Mr. Holler takes us on on a delightful tour of all the floors of this big library. Later I photographed a man from Syria who is learning German. We communicate through Walker’s Waldorf School German and this man’s very broken German. Somehow it works and we get his permission to take his picture. It has rained every day since we have been in Europe and we drive on through the downpour to the beautiful Hartz Mountains. To relieve the long drive we pull off after the rain and Walker and I play a vigorous game of frisbee in a forest filled with witches and gnomes and old German fairytales. We finally arrive in the pretty little mountain town of Goslar. Walking the streets after dinner I realize we have stumbled into a German version of a Thomas Kincaid painting. Weirdly cute with tiny, twisty streets, little canals and beautiful gnome-like houses. I guess that this must be what Germans like to think of as a part of their essential character. Strangely, there is NOBODY on the streets. But as it is getting dark we turn a corner and stumble upon a large group of Muslims just as they ending their Ramadan fast. Very surreal. Ah, Europe!

7/1/16 – The front of the Goslar Public Library fits well into the surrounding streets. It is hundreds of years old and the essential German character of the building is part of this ancient small town. We hadn’t planned to visit the university town of Göttengen and again tried to charm another receptionist who didn’t speak English. The head librarian later introduced us to an older woman named Almut who is one of the main German language tutors in the library. Her stories were often inspiring and sometimes tragic. She told us of a man from Gabon who was one of three people who survived a refugee boat crossing of the Mediterranean. In her German class he was so proud to explain his knowledge of world geography. She and the library are on the front lines of the effort integrate the new migrants into Europe. After more rain and many more “klicks” we arrive in the east German town of Mülhausen. It’s library is housed in a 13th century church but unfortunately it was closed. After many tries I make a nice image of the exterior with giant cumulonimbus clouds bellowing above. Mülhausen seemed poor and eerily empty. Our final destination is the old royal town of Weimar. It used to be the Capitol of Germany during the disastrous Weimar Republic of the 1920s. Today it is filled with relics of its former glory days. The Duchess Anna Amalia Library is one of those beautiful relics. It’s Rococo Hall was amazing and over the top. It is filled with busts of the literary giants that once roamed here.

7/2/16 – We get up again at the ungodly hour of 6 AM to be able to photograph inside the Amalia Library’s Study Center by 8. None of us are early risers and much of this trip has been an exercise in sleep deprivation. In this case it is worth it and the Study Center is amazing. We head on to the hard scrabble town of Magdeburg in the former East Germany. This former industrial town is located in one of the poorest parts of Germany. It literally looks like some of the bombed out photos of Germany after WW II. To help create more use by the citizens the city decided to create an Open Air Library near the center of a neighborhood. It looked thoroughly abandoned, filled with graffiti and the trash barrels were overflowing with garbage and empty liquor bottles. It didn’t help that it was pouring rain. While Walker carefully held the umbrella over me I photographed this depressing place. This city really showed the gritty side of former East Germany and why it will take a long time for Germany to reunify. Bremen is located back in the former West Germany and the differences were striking. The Library was housed in a massive, former police station. As I photographed the exterior, exuberant waves of singing football fans walked by on their way to watching Germany play in the Euro Cup. Walker found an amazing old restaurant in the old part of Bremen where we celebrated Ellen’s 71st birthday. 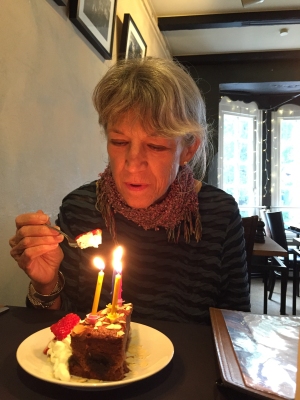