7/8/16 – We photographed three libraries in Berlin today. The Berliner Stadtsbibliothek was an artifact of the Cold War in east Berlin. It was fascinating to see a former Communist library in the modern hustle and bustle of contemporary Berlin. Our guide, Anna Jacobi, made the place come alive and gave us insights into life in Cold War East Berlin. The Library was part of that ideological struggle. The Amerika Memorial Library was build in 1954 and was the West Berlin expression of Cold War soft power. Before the Berlin Wall went up in 1961 people could travel between East and West Berlin. The Amerika Library was built with American funds and the name honors that gift. The library faced East Berlin and drew large amounts of East Berliners to read books that were not allowed in the Communist East. 80% of library users still use the Amerika library and the place was packed. Finally, Ellen, Walker, his friend Anita Wilcox and I visited the Babelplatz Memorial to Book Burning during the Nazi era. We arrived at dusk and look down into a subterranean lit room filled with empty white bookshelves. Like all good public art this helped us understand the insanity of that terrible time. The empty shelves show us the destruction of the commons which is still happening today. We walk into the night to the Brandenburg Gate, the Holocaust Memorial and the American Embassy. To our surprise I noticed inside an Embassy window was a statue of an upright bear dressed like the Statue of Liberty and draped in the Gay flag. It made us proud to be Americans. 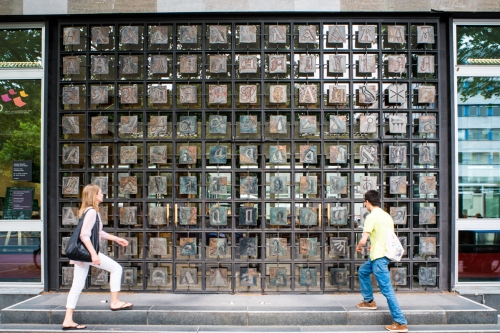 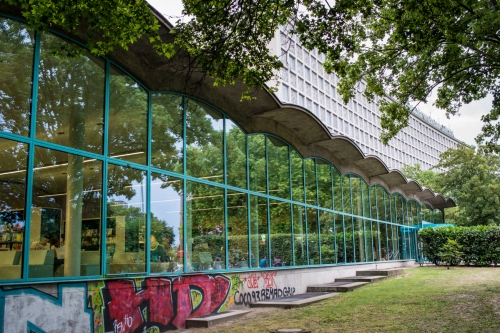 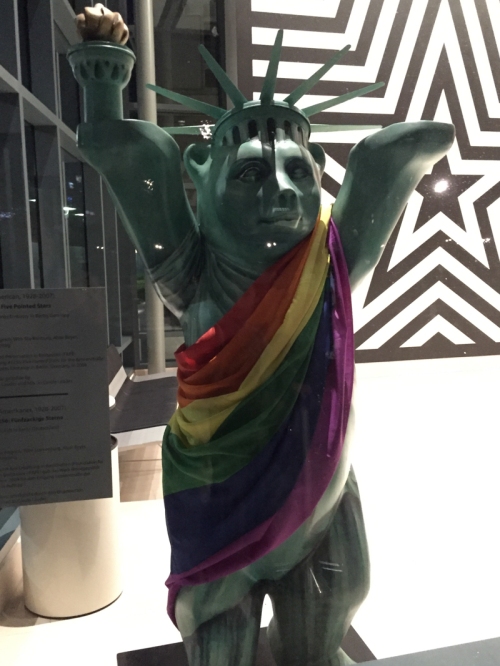 7/9+7/10+7/11+7/12/16 – We actually took a few days to relax, be tourists and do chores. Templehof Field was transforming from a Nazi built airport (one of the largest construction projects in the world) to a massive park in the middle of Berlin. Ellen, Walker, Anita and I threw the frisbee, drank cold drinks on this hot day and generally marveled at it all. Later we went to a section of the Berlin Wall which included buildings from which people tried leap to their freedom over the Wall. Later still Ellen and I visited another section of the Wall with a photo show of huge photos from the Syrian war called War on the Wall. Amazingly, while admiring this photography I met the artist Kai Weidenhöfer who had done this fantastic project and found out more about his work.

7/13/16 – We took a beautiful train ride from Berlin to Poszan, Poland. We then rented a car and drove southwest to the small Polish town of Leszno. The library there was located in an old Jewish cemetery and the building used to be the mortuary. A huge collection of headstones, many with Hebrew inscriptions were neatly stacked up outside the library. The entire Jewish community here was wiped out by the Germans during WW II and the cemetery destroyed. The Holocaust in Poland became a little more real. We arrived that night in the surprising city of Wrocław. 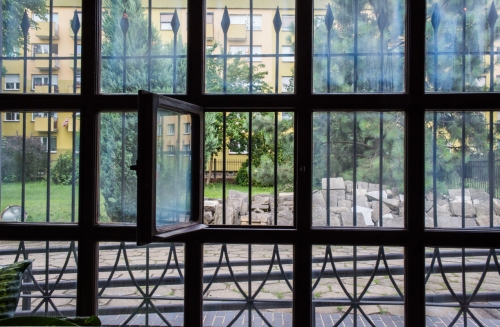 7/14/16 – We photographed three libraries in Wrocław. The Ossolineum was a former monastery and is a now a fantastic grand old library. We were given a long tour and I photographed many fascinating things including a book that a bullet had traveled through during WW I. The Wrocław Mediateka was housed in an old German coffee roastery but it was young, hip and a very friendly, inviting place. Finally, the Wrocław Public Library was located in a great old building off the main town square. It is made up of several libraries representing different parts of the world. We visited the American Corner and then visited the Korean Library, the German Library and the Children’s Library. Wrocław was gritty but filled with faded, glorious old buildings. After photographing throughout the rainy day we stumbled into a delightful vegetarian restaurant in the middle of a downpour.80% of the town was destroyed during the war and twenty five years after the Cold War this town seemed poised for a comeback. 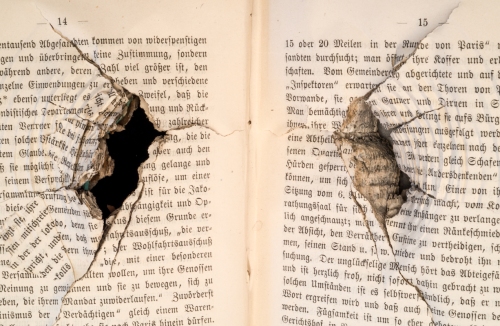 7/15/16 – Wrocław is a 2016 European Capitol of Culture and was designated by UNESCO the 2016 World Literary City. It has more branch libraries than San Francisco (26 vs. 24) and has many thriving bookstores and literary events. I photograph a great old library in a former Masonic Hall in a town west of Wroclaw called Legnica. It was the Nazi headquarters during the War and later housed Russian occupation troops after it. We get taken on a tour of the library by the librarian and her translator. I then started photographing while Ellen chats up the librarian and Walker walks the streets of Legnica looking for food. 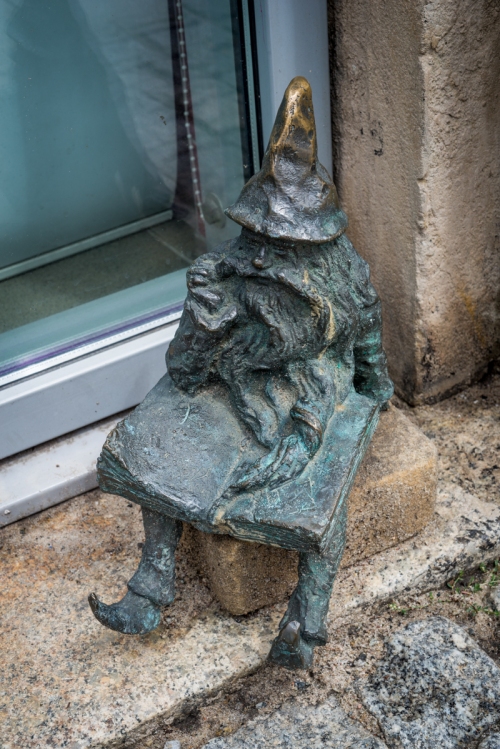 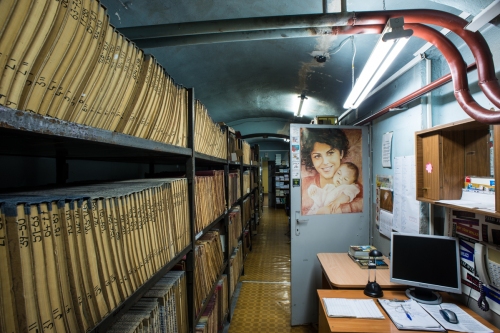