NORTH BY NORTHEAST: Thessaloniki and Xanthi

NORTH BY NORTHEAST: THESSALONIKI AND XANTHI

We left Athens in the rain on a train heading up the long coastal plain to Thessaloniki. I love the stately, almost 19th-century pace of traveling by rail. Countless Alfred Hitchcock movies flashed before my mind. But the beautiful Greek countryside was the real star of this show.

Thessaloniki is often called “Geece’s Second City” but it really is a world on to itself. Athens is considered the heart of Ancient Greece. But this part of the country produced the Macedonian Empire and Alexander the Great. They conquered Athens and much of the known ancient world.  Thessaloniki today is a vibrant port city with a great cultural scene including world-class museums of contemporary art, cinema and photography. Lonely Planet is not exactly our Bible but it does help us locate interesting and quirky places to eat and stay, here and throughout Greece. 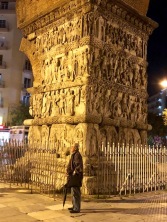 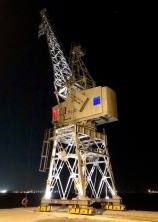 The next day we rented a car and headed east into the part of Greece called Thrace. Soon, looming just to the north were the massive Rhodopi Mountains and the border with Bulgaria. Kavala is bustling city with a massive old fort sitting atop the highest hill in the old town. History is never far from the landscape here. The Kavala Public Library is large but mostly empty when we visited. The very friendly staff were excited to see us and I make some nice images of researchers in the newspaper archive. As we were leaving a young man sprinted to catch up with us in a parking lot. He was a local journalist and we did an interesting interview on the spot on why we were there, libraries, refugees, politics, etc., etc. 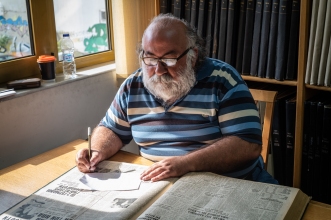 We continued east through the mountainous, coastal Thracian landscape to our destination of Xanthi. This is one of Greece’s least visited places. It was once home to a powerful, non-Greek ancient civilization and is influenced by its neighbors Bulgaria and Turkey. The area contains unique Muslim minorities that settled here during the Ottoman times.

The old town of Xanthi (it means “blond” in Greek and I am guessing it’s because of the presence of people here from the north) is located snug up against the beautiful mountains. It contains timber-framed houses on narrow, winding streets and old mansions once inhabited by tobacco barons. Walking the main street around 7PM we are astonished at the number of families with children strolling past the high-end shops. In the crowd I saw several elegantly dressed Muslim women wearing scarfs. Xanthi is obviously a fascinating mixing zones of cultures.

We spent a good part of the next day at the wonderful Xanthi Public Library. It contains a Tech Lab run by Dimitris Giannakoukis. The Tech Lab is part of American Spaces which is sponsored by the US State Department. We first encountered these two years ago in Poland and Ukraine. They receive books and American technology that are a part of a “soft power” effort by the US government. Like the Fulbright, it is an effort to engage America, on a local level, with the world. 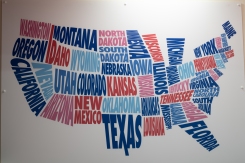 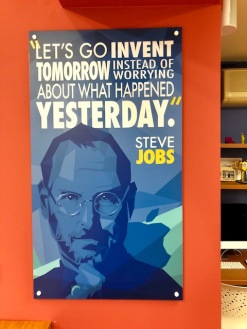 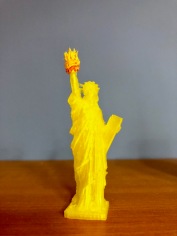 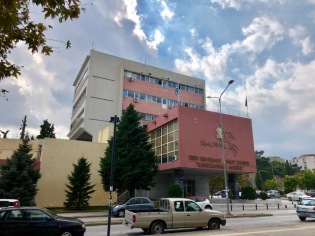 The library was started in the 1950s by a Greek writer who donated his personal library to the city. He survived WWII and he was a communist. But he felt that books were a way of healing his fractured country. While photographing his Greek language notebooks and journals I felt as if I almost got to know him as a person. It was interesting to see how one person could make such a huge, positive difference. We saw the same story earlier with the founder of the library in Veria.  The most vibrant libraries that we have encountered so far seem to have been founded by a generous, charismatic individual.

We came back to the library at 6 and I gave a lecture to a large crowd of mostly young people who seem fully engaged with my talk. I am always surprised and happy when this happens.

The next morning we are undecided which of several places we should visit in the nearby area. I had been awakened at 7:00am by a marching band going by our window. When I later looked down on the street there was a police car parked in front of our hotel and our street was earily quiet. Images of the Greek military coup in the movie “Z” flashed before my mind. When we were about to check out we were told that we would have to wait because all the streets were blocked for a major parade. We decided that this was what we would do today and plunged into the gathering crowd. Ellen reminded me that the Fulbright had warned us not to participate in demonstrations but this seemed like a peaceful, even joyful group. After waiting a long time a group of generals with lots of medals and swords met a group of Orthodox priests on a reviewing stand and then the parade began.

It seemed that almost every child in Xanthi marched by us in school uniforms. There were all kinds of groups including Muslim girls in scarfs, people in traditional Greek costumes, a group of special needs kids and even a Tai Kwon Do club. The crowds were enthusiastic and everyone seemed to know someone in the parade. After that, a sizeable chunk of the Greek army marched by carrying machine guns and stepping smartly. We found out this was a celebration of when the Greek army kicked out the Bulgarian army in 1919. Apparently the Greek government makes a real effort to have a presence here because this area is considered an important frontier. After three hours we felt this was memorable way of getting to know this part of Greece. The sound of marching music filled my mind during the three-hour drive back to Thessaloniki. 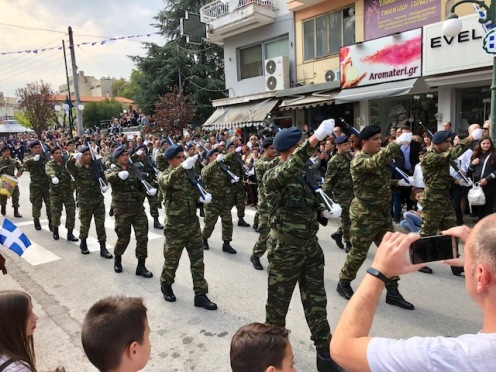 The next morning I photographed the Derveni Papyri at the Thessaloniki Archeological Museum. It is considered the oldest European “book” and is part of UNESCO’s Memory of the World program. Greece’s climate prevented any earlier papyri books from surviving. This one was completely burned in a 3rd Century BC funeral pyre. But in the ashes the text somehow was preserved. This is an example of “bibliocide” where the destruction of the book actually preserved it.

We then schelpped my camera gear over to the large Thessaloniki Main Library. It is in a striking building with a friendly staff and lots of people. However, I had tried multiple times since last June to get permission to photograph here and had not heard back a peep until this morning when permission finally came through. Better late than never! 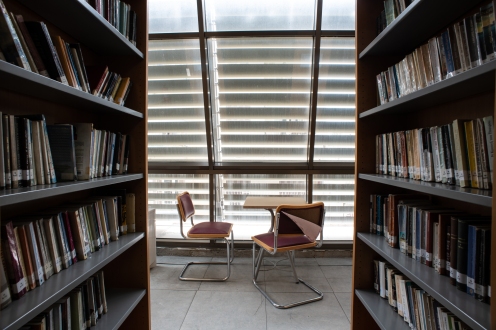 We ended the day at the Ano Poli Branch Library. It is housed in an old, beautiful mansion built for an Ottoman Turk military officer. At one point it housed refugees, later was a school and is now a library.

We ended the evening having a late dinner with a fellow Fulbrighter Herman Adney, his wife Michelle and their adorable infant daughter Sophia. He is on a Greece-Turkey Fulbright and they will be spending six months in each country. The conversation ranged far and wide and we all agreed that the Greeks have a very special regard and treatment of children and a love for sharing good food and conversation.

The next day we hopped back on the train traveling along the plain without the rain to Athens and home. 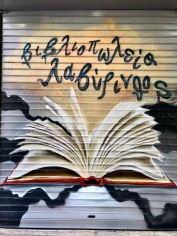 One response to “NORTH BY NORTHEAST: Thessaloniki and Xanthi”