Through the Cradle of the Civil War and Civil Rights

Through the Cradle of the Civil War and Civil Rights

After spending most of September in Vermont, we headed south at the beginning of October. While staying with Ellen’s sister Martha we visited the wonderful Isabella Stewart Gardiner Museum in Boston.

We stayed with our friends Dave and Claudia in Salisbury Mills, NY in the Hudson River Valley.

We spent one day taking the train to New York City to see a retrospective show of Vija Celmins at the Met Breuer Museum and have dinner with our friends Lynn and Stanley in Brooklyn.

The next day we drove to Washington, DC to stay with our friends Jeff and Susie.

Jeff used to work at the Smithsonian and he took us to see the new and astonishing National Museum of African-American Art and Culture. We didn’t realize it at the time, but this Museum set us up for the rest of our trip through the South.

As we drove south from Washington, I felt like we had entered the South. Being born and raised in California, I have always been fascinated by this part of the country. My father and I used to have big arguments about civil rights when much of the history of that movement was being played out here in the 1960s. As we drove through Virginia, North Carolina, South Carolina and Georgia I noted my first impressions: red dirt, kudzu, Southern pines, anti-abortion ads, friendliness, Civil War memories, peaches, William Christenberry’s photographs, Civil War battlefield sites, Lewis Hine photographs, Walker Evans and the 1930’s Farm Security Administration’s photographs and listening to the Blues. 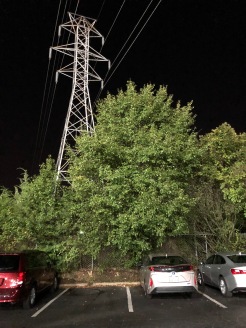 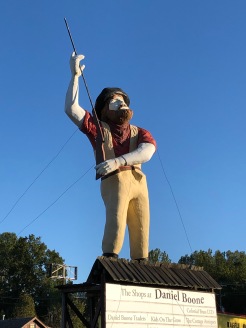 After the end of a long drive and listening to lots of podcasts about the insanity with our President, we arrived at the small but very pleasant town of Eclectic, Alabama. It was founded  in 1907 by a practitioner of eclectic medicine, hence the name. I had spent 18 years photographing libraries throughout the United States but, unfortunately, didn’t photograph any libraries in Alabama or Hawaii. I was here in Alabama to make amends and help complete the project. The Eclectic Library was housed in the old red-brick jail. Behind it was a very large water tower. Inside, the librarians were very enthusiastic about our project and took me on a grand tour of their tiny library. In the half an hour tour I learned much about this place including that Jessie Owens, Hank Williams, Willie Mays and Condoleezza Rice all came from Alabama. We later pulled into the capitol city of Montgomery after dark. I was exhausted after the long drive but happy to have finally photographed a library in Alabama. Impressions of this state included cotton, aerospace billboards, lots of churches, high school football, “Jesus Saves”, and vast tree farms. 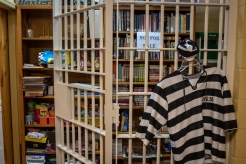 Ellen’s sister Martha had recently told us about a new museum in Montgomery dedicated to the civil rights struggle called the Legacy Museum. A few days ago, we had visited the National Museum of African-American Arts and Culture in Washington, DC. That museum was a great celebration of the accomplishments of African-Americans as well as some of the dark history of slavery and segregation. The Legacy Museum focused on the grim reality of slavery and segregation and the heroic fight of the Civil Rights Movement. 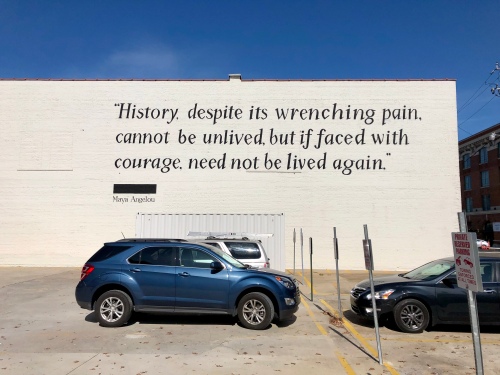 Of course, Montgomery was one of the largest centers of the nineteenth-century slave trade, was one of the capitols of the Confederacy and was the scene of the famous Montgomery Bus Boycott which was an early battle for civil rights. As a result, there was great resonance in standing in the place of so much human suffering and conflict.

One of the great turning points in the Civil Rights struggle was the march from Selma, Alabama to Montgomery in 1965. We drove the 54-mile National Historic Trail in reverse arriving in the depressed town of Selma around mid-day. As we drove over the historic Edmund Pettus bridge, we came upon the scene of the Bloody Sunday police riot. Here, State Troopers beat the marchers with night clubs, then donned gas masks and released tear gas to further terrorize the marchers. The demonstrators began running back, stumbling over each other and trying to ward off blows. The troopers and posse continued to use nightsticks, whips and rubber tubes to drive the marchers through the streets of Selma. Standing on these same streets I felt it made these awful events more real by physically being in the place of such historic consequence. 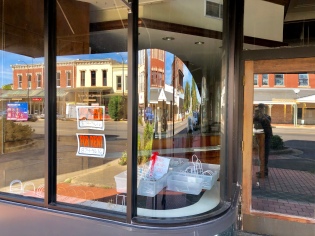 The one place in Selma that offered some release from the surrounding poverty and grim history was the Selma Public Library. The exterior and landscaping seemed like an oasis. The interior contained an extraordinary quilt that was produced by the community churches. It addressed Selma’s painful past and was an attempt to continue the community’s struggle to heal. There was no better place for this than the Selma Public Library which had literally witnessed such horrors on its front steps 54 years ago.

We drove west from Selma and as we turned off on to Alabama State Highway 61 (not to be confused with Mississippi’s Highway 61 that Bob Dylan made famous) we entered the very rural Alabama Black Belt. This name refers to the incredibly rich soils that stretch all the way to Georgia and the Carolinas. It was also the heart of the plantation cotton and slave empires of the antebellum South. Cotton was still grown here but the crops have been diversified. This was beautiful country, especially in the warm, Fall afternoon light.

We arrived in the fascinating restored town of Newbern, AL. It was very small with a population of 186 and a per capital income of $9,476. The Rural Studio of Auburn University was based in Newbern. Its architecture students work under the supervision of faculty designing and building affordable housing and similar projects to support the population of rural areas of Alabama. One of the projects the Rural Studio built was the Newbern Public Library. It was housed in a former bank and the building was donated by a local family to become a social center and the first public internet point in the community. It was designed to be a resource-rich social center, but also to preserve the town’s history, heritage and memories. Newbern and its library gave me some hope for the future. 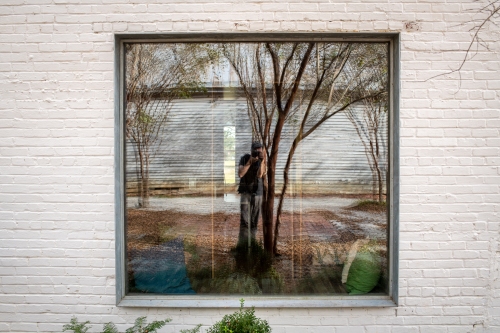 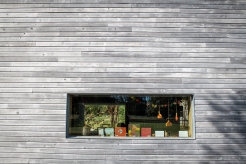 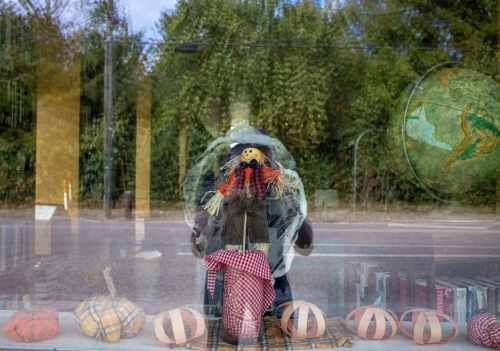 Newbern is located in Hale County, Alabama. Walker Evans photographed the area in 1936 with writer James Agee. They looked at a group of dirt-poor, white tenant farmers in one of the poorest parts of the rural South. They produced their famous book from this project called Let Us Now Praise Famous Men in 1941. Photographer William Christenberry also worked here for many years. In 2019, the film “Hale County This Morning, This Evening” by artist RaMeil Ross was nominated for an Academy Award for Best Documentary Feature, poetically addressing the region’s shift in demographers and the power of intra-community cooperation.

The second library we photographed in Hale County was in the town of Greensboro, the Catfish Capitol of Alabama. This area was also central to the cotton/slave empires and was part of the civil rights struggles of the 1960s. In 1968, Dr. Martin Luther King hid from Klu Klux Klan members here in what is now operated as The Safe House Black Historic Museum. The beautiful Hale County Library dates back to 1925. Additions to the Library have maintained the original style. The very smart, literate and gracious librarian was kind enough to let us stay a half an hour after closing time while she filled in Ellen with the local history and I scrambled around the small library with my camera. 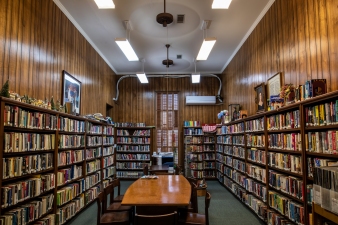 We then drove into the night in a white-knuckle downpour. Listening to podcasts about the crazy stuff coming out of the White House was the only thing that distracted us from the sheets of rain and lighting all around us. We finally landed in Birmingham, AL, exhausted.

In our hotel there was a large room with a big screen TV showing Trump blathering on at one of his rallies. I was encouraged to see that no one was watching the story and everyone had turned their backs to the screen and the President. I was also happy to see a car in the parking lot from Mississippi with a “Republicans Against Trump” sticker on the bumper. 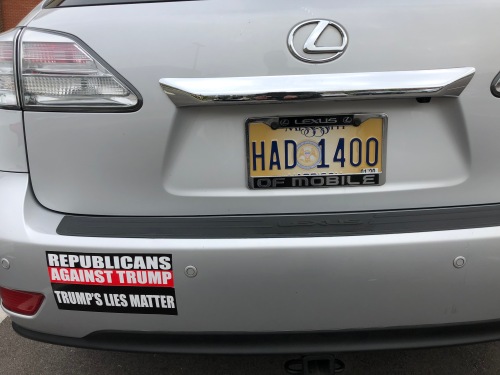 Walker had urged us to have a meal at SAW’s BBQ in Birmingham. It was absolutely a highlight and my shrimp and grits meal was incredible. 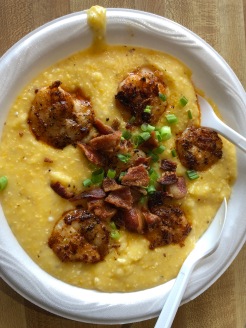 Our first stop was the famous Birmingham Public Library which had been the scene of a sit-in in 1963 to force the desegregation of this Jim Crow era library. We weren’t able to photograph the beautiful Reading Room where that sit-in took place. But I did photograph the exteriors of the both the old and new libraries. This library made me think that I should think about starting a new project on libraries that were important in the Civil Rights struggle including ones today such as the library in Ferguson, MO. More on that later as this idea develops… 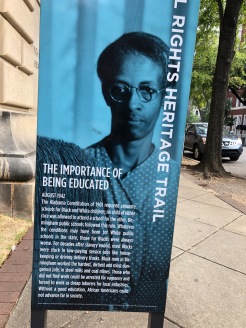 The next stop was the site of the death of four little girls on Birmingham Sunday. The lyrics of that famous Richard Fariña song were in my mind as I gazed at the reconstructed 16th Street Baptist Church. In 1963 members of the Ku Klux Klan blew up the church in a terrorist attack killing the four girls and injuring 22 others. No prosecutions were conducted until 1977 when one of the killers was convicted. The others were convicted in 2001. The bombing marked a turning point in the Civil Rights movement and contributed to the passage of the Civil Rights Act of 1964.

Martin Luther King described Birmingham in 1963 as “probably the most thoroughly segregated city in the United States”. It was nicknamed “Bombingham” because of the large number of bombings of black properties and churches that occurred during the eight years before 1963. We walked through a park near the church that was a rallying point during the protests. Here, peaceful protestors were knocked to the ground by powerful water cannons. Police dogs attacked women, men and children. Several hundred protestors filled the city’s jails including many children. The park was filled with sad memorials to all of this and more.

I was deeply moved and my heart was crying as I stood in the park remembering the words “On Birmingham Sunday/ the noise shook the ground/ and people all over the world turned around/ no one recalled a more cowardly sound/ and the choir kept singing of freedom.” Amen.

This seems like an appropriate place to end this post. From Birmingham we will drive to Little Rock, AR; Oklahoma City, OK; Santa Fe, NM; Flagstaff, AZ; Bakersfield, CA and finally home. I’ll do one more post at the end. Until then…