MISSISSIPPI DELTA BY DAY AND THE OZARKS BY NIGHT

7/1/12 – The two southern Illinois towns of McLeansboro and Cairo were way off our route but had incredible libraries. We had tried to go to Cairo last summer but we just couldn’t make it fit our tight schedule. Today we plunged into the heat and humidity determined to make it work this time. The sign next to the library in McLeansbooro said 106 degrees but later went up to 108 degrees at 1:08 in the afternoon. The library was closed on this Sunday but was truly a gem. The town was closed up tight with only the Dairy Queen open. Even the charity run had been cancelled because of the oppressive heat. We drove to the southern tip of Illinois and entered the northern edge of the Mississippi Delta.  Cairo, IL was an important steamboat and shipping town during the Civil War. It had fallen on hard times and had an astonishing history of racial violence during the 20th century.  I gasped as I read to Walker the details of this history from Wikipedia on my iPhone. Like many of the shattered towns we have visited (East St. Louis, Detroit, Newark, Camden) it had an incredible library built during better times. Walker literally ran around the almost empty town taking pictures while I focused on the library. It was difficult to understand how towns that are suffering so much had once been able to produce such opulent libraries and civic infrastructure. Cairo’s racial violence was famous but so was the library, a symbol of hope and transformation. Although Illinois is considered a Northern state Cairo is culturally closer to the South. Its’ long history of black and white violence along with high unemployment eventually depopulated much of the town. Today it seemed like a collapsed city. This was the southeast corner of this summer’s Library Road Trip. As we crossed the Mississippi River we turned west towards the Ozarks. Last year we had a wonderful drive through these unusual mountains with Nick Neumann. That day was mostly in Arkansas and today we were in the Missouri Ozarks. We ended our drive in the little town of Eminence, MO. This area is famous for kayaking, fishing and adventure sports and I was expecting it to be something like Moab, UT. There were some recreational tourists but mostly this was a poor, white town. We stayed in a cabin on the edge of town at the Shady Lane Motel and Cabins. I asked the clerk where she would recommend for dinner. She asked with great concern in her Southern drawl “Are you looking for a place that serves adult beverages?” I knew then that this was mostly a dry town and I went back to our cabin and drank one of our beers. We had dinner at a drive-in restaurant called Hawg Heaven. It was incredibly packed on this warm night and felt a little like our favorite rural Vermont drive-in called Sandys. Except this was Sandy on steroids. Everyone was white and either a hell raiser or a Bible thumper. Walker and I felt very out of place in our “Vegas!” and “Zzyzx” t-shirts. As it was getting dark we went down to the nearby river. The water was cool and we could see little critters scampering in the woods. The sun finally set over the good old boys with a Confederate flag on their pickup truck. 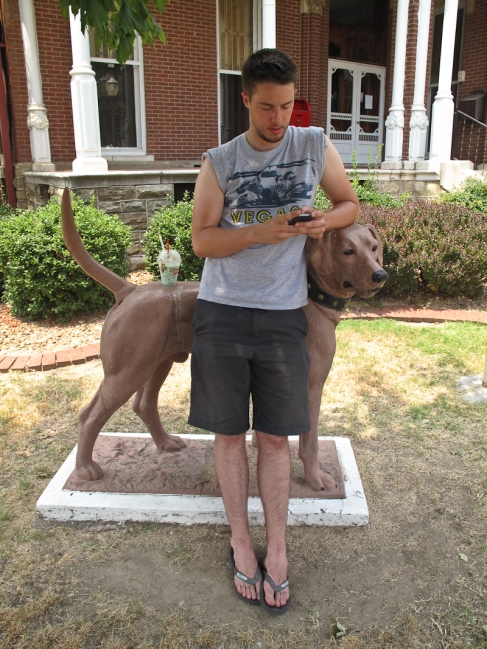 THE MISSOURI OZARKS TO KANSAS CITY

7/2/12 – Eminence had a red brick City Hall/Library combination in the center of town. It had dozens of American flags next to the prominent Veterans Memorial. Some of the flags had the names of individual soldiers attached presumably from our recent wars. These memorials are another example of the library as a home for the collective memory of a community. Although we photographed one small library in Bunker, MO today was more of a vacation from libraries. Walker had discovered a Missouri State Park called Johnson’s Shut-In. The name referred to a geological formation that was like a box canyon with a river running though it. The rocks of the riverbed had been wildly eroded and there was a large, happy crowd of people splashing in the water. We enthusiastically joined them. It felt great to chill in the pools of water in the middle of the Ozarks. We felt very far from San Francisco. We spoke with a man floating in the water who told us about the extreme meth problem throughout this area. The white poverty we had seen reminded us of the movie “Winters Bone”. This area is both culturally and geographically remote from the rest of the US. The twisty roads and the isolated valleys help create pockets of poverty where the production of meth for some seemed like the only way out. We drove north through occasional pounding rainstorms that helped cool the temperature below 100 degrees. After many hours we arrived in Columbia, MO to visit the parents of our friend Michael Black. Flos and George Black are in their 90s and in a very nice retirement home. When we left it was a bittersweet departure and we hoped to see them again soon. As we drove west we finished our book on CD called “1491”. We immediately started a new book on CD called “A People History of the United States” by Howard Zinn. I had read it before but purchased the CD set because I thought Walker would enjoy it. We ended our long drive in Kansas City, MO. 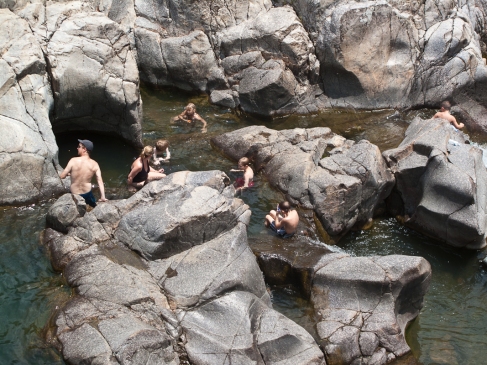 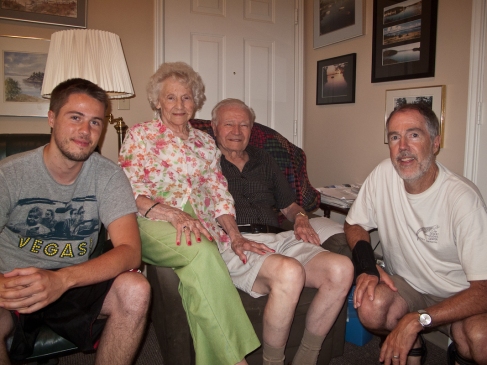 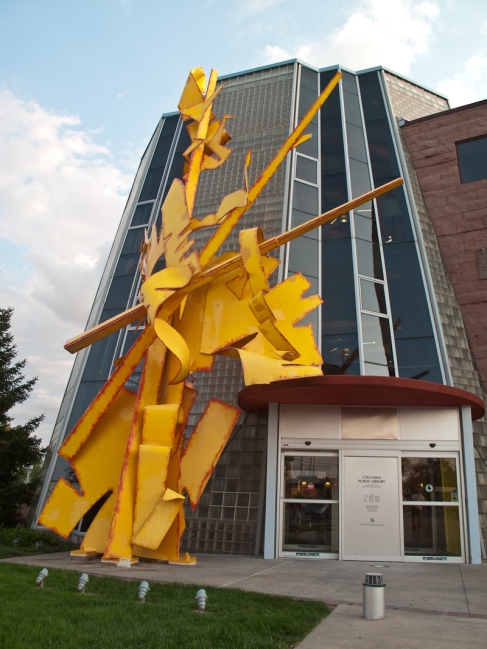