1st Week and a Tale of Two Greek Libraries

1ST WEEK AND A TALE OF TWO GREEK LIBRARIES

We spent our first work day this week at the dazzling new National Library of Greece in the Stavros Niachos Foundation Cultural Center. OMG, what a place! We spent our second day at the old 19th century National Library that it has replaced in some ways. Ionian columns surrounded the Reading Room like pioneer wagons defending the sacred space from the crazy, commercial world outside. I was shocked by the difference between these two competing visions of what it means to be a library. In my mind, both are good. And both speak about the times in which they were created. The old library still houses their vast newspaper collection and is, fortunately, still part of the National Library. I spent one hot day in a section of the library that reminded me of the movie Matrix. It is a vast three-dimensional space that once housed the archived memory of Greece in books. I felt like I was walking around inside a brain. The five storey metal structure had no AC. It also reminded me of the metal box the British officer was put in to be tortured in Bridge On the River Kwai. After several hours I emerged from the heat of this space drenched in sweat. 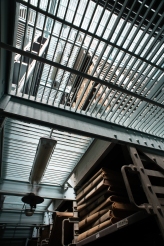 The new National Library is a bold experiment in what the future of libraries may become. Books are a part of that future as seen by the welcoming entrance way  and the “Book Castle”. The fresh air and sweeping panoramic views from the roof of Athens and the Aegean are also a part of it. The public spaces and programming are designed to bring people in to engage them in the culture of this place. But through the telescopes one can also catch a glimpse of the Acropolis -a reminder of the past as we enter the future. 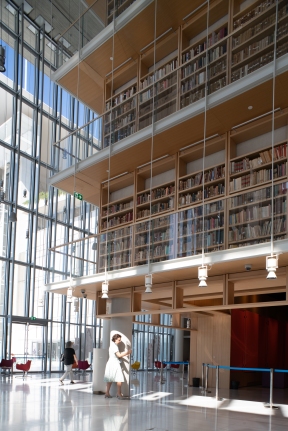 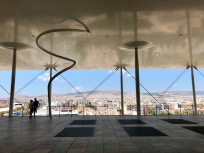 One special person we met at the new Library was Gregory Chrysostomidis. He had visited 150 libraries throughout Greece. He has the same affliction we have of trying to understand the nature of libraries on a big scale. He took us on a quick tour of libraries in Athens and then drove us an hour out of town to north Athens to visit a small, struggling library that was having an open house to celebrate the end of their children’s summer programs. The children all spoke perfect English and were astonished that we had come all the way from America to photograph their library. One group showed us their perfect murder mystery video they had just completed. It included a live performance by their teacher acting out her part. We also heard a boy telling us about the student’s sculptures based on a famous Greek artist whose work was inspired by the student uprisings during the Greek junta. 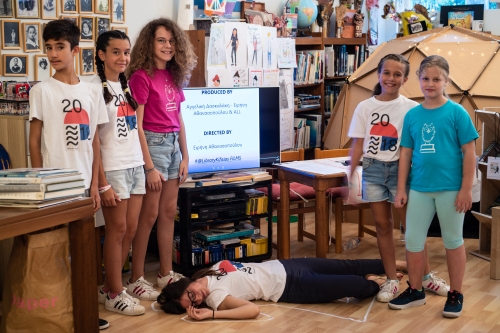 Our neighborhood is a fascinating mix of the trendy and the anarchist parts of Athens. We see the signs of this everywhere we walk. One of the highlights of this trip so far was having dinner with Yannis Zervos, founder of the Athens Center and former board member of the Greek Fulbright Commission. I found out about him while talking to his son at a coffee shop in San Francisco. Small world. It was a magical evening and hopefully someone will write a book about Yannis and his cultured and eloquent world. 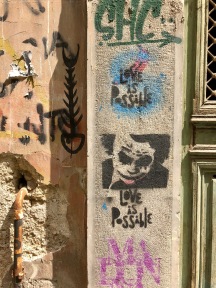