One of the great luxuries of this Fulbright Fellowship is the ability to dig deeper into our subject than a normal traveler breezing through a new culture. Of course, we are trying to understand the concept of what is a library. What should be in a library and why? What are the roles of different types of libraries? Why do we have this need to preserve memory?

In Greece there is the added dimension of time. Greek history is everywhere and goes back thousands of years. We were told that if you dig anywhere in Athens you will find artifacts dating back to Classical times. We went to one of the great Museums of Athens – the National Archeological Museum to see this rich history. The Greek cuneiform tablets were not as old as those from Babylonia but they show the beginning of the Greek language as it evolved from Phoenician and Mycenean languages. Greek is the second oldest continuously used language after Chinese. An exhibit on the concept of beauty was fascinating as were the archeological discoveries on display.

The Library of the Hellenic Parliament was a rich source of contemporary Greek culture and history. After going through a pretty rigorous security- check we were escorted by a whole range of highly-educated people that expanded that history and deepened what it means to be Greek today. We left with a 20-pound gift bag of their exquisitely produced exhibition catalogues. 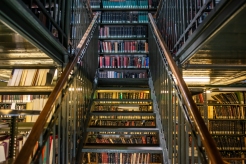 The Lilian Voudouri Music Library at the Athens Concert Hall was another surprise. I had no idea what to expect as we entered a library about music. Byzantine musical script was something I had never seen before. How music could be produced from that was mind-boggling. The pages of newspaper clippings about Mikis Theodorakis, the man who wrote the music for Zorba the Greek and Z, gave us an insight into contemporary Greek musical culture. 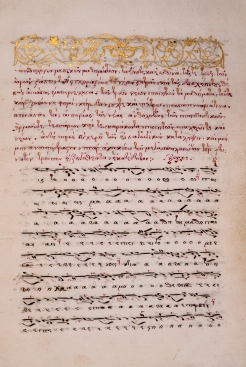 Like San Francisco, Athens is a very hilly town. As we walked home from the Music Library we decided to go to the top of Mt. Lycabettus where we were rewarded with spectacular views looking down on our densely crowded neighborhood of Exarhia. Off in the distance, like a beaconing jewel was the Acropolis and the Aegean. 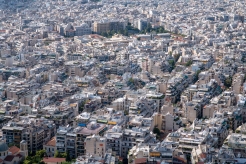 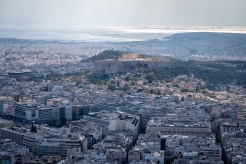 Much of this Fulbright trip will be exploring things we don’t know. I did a massive amount of research on the internet about each of the libraries we hope to see. But I am always hoping for the unexpected. The American Library at the Hellenic American Union was housed in a private college that was accredited through the State of New Hampshire. It has a long-running American Spaces that was started years ago by the US State Department. It was interesting to see a book on the Harvard Medical School in Greek with a poster of National Parks in Maine in the background—examples of American “soft power”.

Like all of Greece the Central Municipal Library of Athens has gone through hard times for many years. In some ways, it reminded me of the library in Stockton, CA where Ellen and I have worked for the last four years. It has struggled against all odds and yet maintains the essential ingredients of an important part of the community. These photos show some of its old books, research and a children’s library.

As we walk the streets of Athens I am stuck by the vibrant street life and the political graffiti. We can learn from what these are saying as we try to understand what it means to be Greek today. The image of the exterior of the old National Library of Greece is a reminder of how deeply rooted the past is in this moment of struggle for Greece.