THE NORTH COUNTRY and PITTSBURGH-BY-THE-BAY

6/23/12 – Mahnomen, MN is a 35% Indian town in the poorest county in Minnesota. It has a fascinating rock-walled library built by the WPA in the 1930s. The friendly librarian was (as usual) a font of information about the community. She even showed me a very good book on the libraries of Minnesota. Walker pointed out what was the best view of a giant liquor sign near the front of the library. It was especially troubling given the problem of alcoholism in some Indian communities. Another great library was in the majority Indian town of Cass Lake, MN. It is one of the poorest towns in the state. The library was also made out of rocks and featured portraits of all the Miss Cass Lake winners, both white and Native. The basement functioned as a meeting room and had a wonderful rock fireplace, an American flag and “old books”. Again, the librarian was very helpful and helped in explaining the story of this town. Coleraine’s beautiful, yellow Carnegie was supposedly the best preserved Carnegie in the US. It was closed on this day and the town was very quiet. We were very excited about going to Hibbing, MN, home of Bob Dylan. Walker had read in Lonely Planet that the town’s library had a notable display on Dylan’s young life here. Unfortunately, when we got here the library was closed and most everything in the town was too. It struck me that many of the hometowns of famous writers, artists and musicians that we have (or will) visit are often tough, working –class places. Jack Kerouac of Lowell, MA; Samuel Clemens of Hannibal, MO; and Bob Dylan of Hibbing, MN all transcended the limitations of their homes to become world famous figures in their fields. I can see why Dylan left Hibbing. Was there something about this backwater, down on its luck, Minnesota town that pushed him into greatest? Do sad, soulful places sometimes encourage genius? Chilsholm was another North Country town that had seen better days. Its unusual brick library was backlit but from the side had just enough light to be interesting. Mountain Iron, MN was the center of the world’s largest deposit of iron ore. Mining that ore was one of the reasons that the United States did so well in World War II. This ore, used in the making of steel, gave us a great advantage over other nations at the time. The world’s largest open pit mine is right here. The Carnegie Library here was spectacular with monuments in front to the glory days of this now faded, working-class town. Images from the movie Deerhunter came to mind. We peeked into the still functioning mine and saw an open pit that stretched beyond the horizon. After a brief stop at the library in Eveleth, MN we drove on to Duluth, MN.  This city has one of the most beautiful entrances we had ever seen. We both gasped as we steeply descended into this hilly city by Lake Superior. The sunset was magical. We both fell in love with this place as we walked over to the lake that looked like a sea. At dinner, our waitress called it the “San Francisco of the mid-West”. 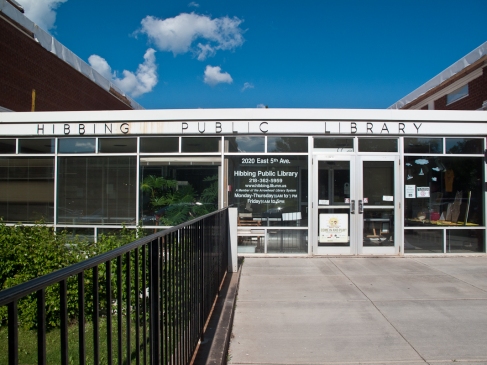 6/24/12 – This morning we woke up to a steady rain. This area had been hammered by a huge storm just two days ago and we saw some of the damage as we drove around town. The downtown seemed pretty seedy with shady characters mixed in with rest of the people on the street. At Jitters Coffee Shop Walker renamed this city the more appropriate “Pittsburgh-by-the-Bay. We were still fascinated by this place but realized that Pittsburgh was a better comparison for Duluth than San Francisco. The Main Library here was ultra modern and closed on Saturday. It’s sleek lines were a great contrast with a French chateau style building on one side and a weird 1970’s housing complex on the other. While Walker was in the car I set up the 4X5 camera. While I was focusing on the library under the dark cloth I sensed someone standing close to me. I turned and found a very agitated African American woman standing three feet away with a red cell phone in my face screaming at me. She demanded to know why was I taking her picture. No reasoning would calm her down. She sobbed about her abusive boyfriend and her missing children and then swung her cell-phone camera back to my face like a weapon. What is it about photography that scares paranoid people like her? Why does this stuff keep happening to me? I thought back to being socked in the jaw last summer by another whack-job in Pittsburgh. I began to realize that Duluth and Pittsburgh really do have some things in common. The only other library we photographed today was the Bad River Tribal Library in Odanah, WI. It too was closed but I was able to take some photos through the window. One sign inside read “Indian Parking – All Others Need a Reservation.” We end our day in the delightful town of Bayfield, WI. It was selected as the Best Small Town in the Mid West for 1997 by the Chicago Tribune. We agreed. After a great dinner in a local café we hiked down an overgrown and unused trail to the shore of Lake Superior. Mist from the Lake mixed with the red clouds of the sunset. All was quiet and peaceful. This was the first time that we could truly relax after spending a week on the road.

3 responses to “THE NORTH COUNTRY and PITTSBURGH-BY-THE-BAY”